The Poland Football Association are adamant their players did not racially abuse England footballers after FIFA launched an investigation into the bust-up that marred Wednesday’s World Cup qualifier.

The England FA are refusing to publicly comment on the controversy as they conduct their own enquiries in search for total clarity on what happened at half-time in Warsaw.

But their Polish counterparts have strenuously insisted that any assertions that their players made racially motivated comments or gestures to the England players are false.

‘The English FA made a complaint at half-time to FIFA to investigate and review what happened at half-time,’ confirmed Jakub Kwiatkowski, the Poland team manager to Sportsmail.

‘But I am 100 percent sure the players were not racist, I am convinced of that. I know the players and they would not do that.’

Both two teams clashed at the end of the first-half with footage showing Glik pinching Walker’s throat.

The flashpoint sparked a mass confrontation between both sides as they headed for the tunnel.

Glik insisted it was only a ‘verbal scuffle.’

It is understood that at half-time two officials from the Football Association, team manager Emily Webb and head of security Tony Coniford, communicated to the fourth official the a complaint which was then lodged to the match commissioner.

Witness statements were taken and it was decided the game should continue.

Glik, who plays for Italian Serie B side Benevento, admitted trading insults with Walker and revealed that the Manchester City defender refused the offer of a handshake later on.

Speaking to TVP Sport after the game, Glik said: ‘There was some scuffle. Later, I wanted to shake Walker’s hand but he didn’t accept it.

‘There was some verbal scuffle but nothing more happened there.’

That came as Fifa began its own probe.

A statement from FIFA said: ‘FIFA is in the process of analysing the official match reports of the FIFA World Cup qualifier match between Poland and England.

‘The relevant information will be assessed by the competent disciplinary bodies in order to decide on next steps.’

Referee Daniel Siebert signalled for the interval after 45 minutes of feisty and full-blooded action in Warsaw, but both teams then suddenly met in the middle of the pitch in an altercation.

Both Glik and Harry Maguire were shown yellow cards after the row, and footage quickly surfaced showing Glik bizarrely pinching Walker’s neck at a free-kick, leading to the reaction from his Three Lions team-mates.

The two players were seen getting involved in a heated exchange just after the start of the break, with both aiming gestures at each other and clearly irked.

Broadcast cameras panned to the crowd initially, but quickly flashed back on to the pitch to show the brawl, with more and more stars piling in to intervene. 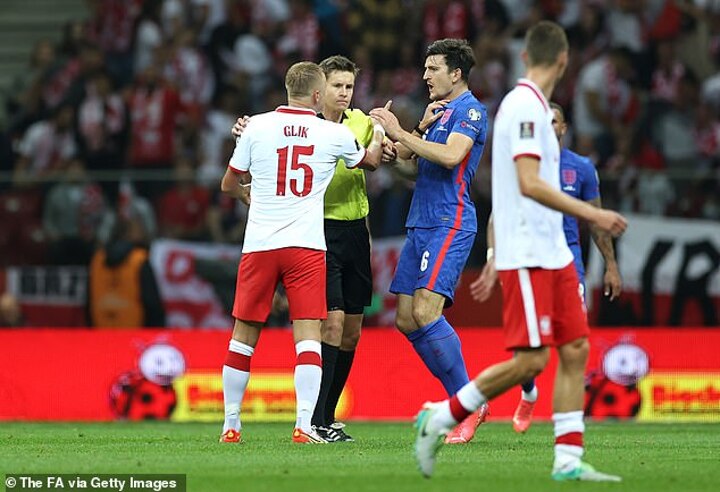 Three Lions captain Harry Kane looked to pull away several of his colleagues, and the officials were eventually able to lower tensions and restore some control.

Glik, despite his grab on Walker, was guided towards the tunnel first, before the referee ordered him back to show him the yellow card.

After the booking was brandished to both men, Maguire was left to walk away, apparently bemused as to why he had also gone into the book.

Social media users reacted to the incident with anger, and praised Walker for not responding to the provocation.

‘Kyle Walker did ever so well not to respond to the bully Glik, pulling the skin under his chin,’ one account said.

‘I’m sure if it was the other way round he would have gone down holding his face. Pity VAR didn’t get involved or maybe FIFA can act?’

‘Makes me mad that Maguire got a yellow card when the ref blind sighted Glik.’

Before the coming together between the teams, no Poland players were booked despite the heated nature of the tie.

Kalvin Phillips, however, picked up a yellow for an innocuous challenge in midfield, while Kamil Jozwiak avoided punishment for bringing down Jack Grealish.

At half-time, pundit Roy Keane warned England to avoid being dragged into Poland’s no holds barred style of play.

‘They’ve been really aggressive,’ he said on ITV.

‘Plenty of tackling, plenty of fouls, the most I’ve seen for a long time in an international match.

‘England, of course, then have to be careful not to be drawn into that. I’m not saying you back down, but just keep your focus on the game.

‘That would keep the fans onside, as long as they stay in the game. England just have to be careful with that side of it.’